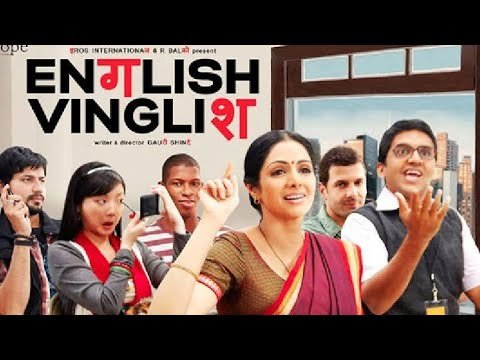 Sridevi is back. A good comeback in the Indian cinema who has stolen millions of hearts in early Tamil movies during Kamal Hassan and Rajinikanth days and later on in the Bollywood stage.

A woman’s self-actualization is well depicted in English Vinglish. One or at the other time, every one of us would have felt I am not speaking the correct English language and Sridevi is not the exceptional case.

Shashi is charming and enjoyable character with her husband and children. But the hurt feeling expressions from Sridevi is awesome when her accents are been criticized.

Shashi is out of the scene when other three in the family makes fun of her childish and incorrect accents. She then takes revenge by having a 5 weeks crash course in English in the United States. Then the story move on.

Story narration is good to the peak of direction and it is an emotional journey in life. Sridevi is the theme of actin in the movie. Mass and Tamil super star Ajith’s special appearance in the Airport and flight scenes reflect the real life incidents. He is yet another support for the movie and the big release in the southern regions of India.

Verdict score 4 stars. English Vinglish is a movie without villain. It is a film with a message. Must watch movie and watch it twice if you admire Sridevi’s acting and Ajith’s mass success.